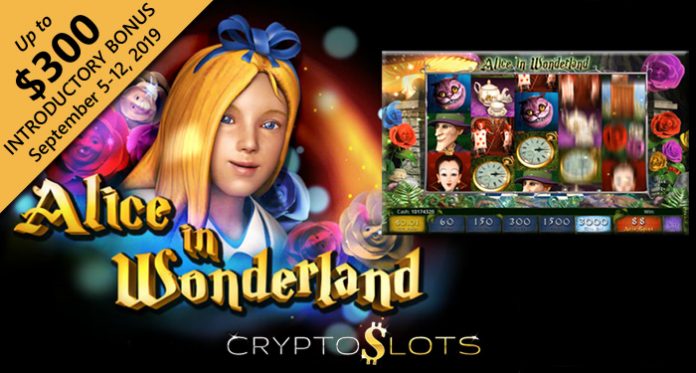 September 5, 2019 London, UK (Press Release) – This week, Cryptoslots introduces another new game for players that like to use cryptocurrency for their online entertainment.

The new Alice in Wonderland slot game has a Scatter symbol that awards free spins, expanding Tweedle Dee and Tweedle Dum Wilds and a Mad Hatter that can magically transform symbols.

Until next Thursday, players can claim daily bonuses of up to $300 for the new game.

“Like the much-loved children’s story, this game is destined to be a classic,” said CryptoSlots manager Michael Hilary. “Our designers have done an amazing job of illustrating the fantasy characters. And with its free spins feature and expanding Wilds, I think we’re going to be paying out some massive wins on this one!”

Alice in Wonderland is an enchanting 30 payline game. Three Scatter symbols trigger up to fifteen free spins. During free spins, Cake symbols double the win and the multiplier increases by one with each winning spin. The Mad Hatter can change other symbols by throwing his hat onto them, possibly creating new winning combinations. Tweedle Dee and Tweedle Dum are Wild and expand to cover their entire reel. Players can bet as little as $.02 or up to $60 per a spin.

May be claimed up to 5x per day. Wager: 35x. Valid for new Alice in Wonderland slot only.
Cryptoslots is a cryptocurrency-only casino from Slotland.com. Players can deposit and withdraw in Bitcoins, Bitcoin Cash, Litecoins and Monero (XMR). Cryptoslots now has 22 provably fair slots, five with High Limit versions, as well as seven video poker games, four with multi-hand versions. There is also one million-dollar jackpot game played with tokens won playing other games. Playing slots and video poker at Cryptoslots automatically earns tickets for the casino’s monthly $10,000+ Crypto Lotto.

Is Bitcoin Transforming the Gambling Industry for Better?

Share the Mother’s Day Love with Your Bingo Roomies