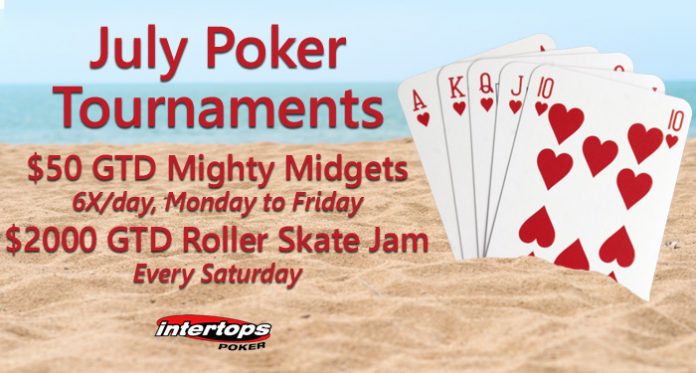 “We’ve got lots of big tournaments with big prize pools on our schedule, but it’s summertime when the living is easy,” said Intertops’ poker manager. “So we thought lower buy-in Mighty Midgets tournaments would go down well with a lot of our players.”

Every Monday to Friday until August 2, six $2 Mighty Midgets tournaments have been added to the tournament schedule. Every two hours there will be standard Texas Hold’em and Omaha tournaments as well as Bounties, Turbos and Big Stacks. Bounty tournaments pay a $.50 bounty for every player knocked out, Turbos feature five-minute blinds and Big Stacks start with 25,000 chips. Buy-in for the daily “Nuggets” tournaments is paid in Gold Chips. (Frequent Player Points earned at real money tables convert to Gold Chips which can be redeemed for prizes or tournament tickets.)

For players looking for higher stakes, every Saturday there will be a $2000 GTD Skate Jam Tournament. Buy-in is $30 but players can win a seat at the table in “Gear Up” free rolls and $3 “Last Chance” qualifiers held earlier in the day.

Players can register for any of these tournaments under the Tournaments tab in the Poker software.

Intertops Poker hosts the busiest poker room on the Horizon Poker Network and attracts all kinds of players from all over the world with generous rewards for frequent players and lots of daily tournaments.

Play BoVegas and Be Rewarded with a $7,500 Welcome Package

Another State is Flirting with Legalized Online Poker

Two-Day Conference in Antigua & Barbuda over Dispute with US Gaming...