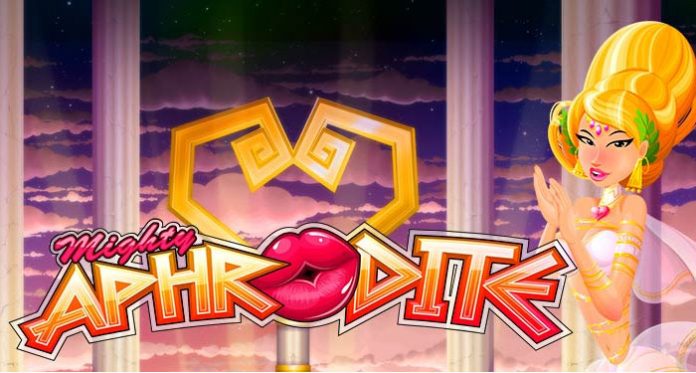 Rival Gaming is at it again and this time they aren’t holding back! The gaming provider announced the release of their latest slot titled Mighty Aphrodite. Mighty Aphrodite is themed around the Greek Mythology Goddess of Love. The 5-reel, 25 payline video bonus slot offers tons of features including multipliers, stack wilds, bonus feature games and up to 70 free spins.

Mighty Aphrodite offers everything a slot player is looking for plus some! The stacked wilds feature is one of the main features of the game with Aphrodite appearing as the stack wild symbol. When they appear across the reels they will cover up two vertical rows.

Win up to 70 free spins when three or more Pegasus; symbols appear. Once the free spins is triggered keep an eye out for Cupid. Cupid will appear across the screen and shoot his arrow to award the multiplier bonus for all free games. The free spins can be retriggered if three or more Pegasus symbols appear during the current feature. Other symbols included in the game are seashells, ripened olives, golden harps, wreathe, clay pots and your traditional poker card symbols 9 through Ace.

Play NextCasino and Become a VIP with Amazing Surprises and Cash...

Get Roaring Free Spins for 7 Days with Royal Panda’s Red...