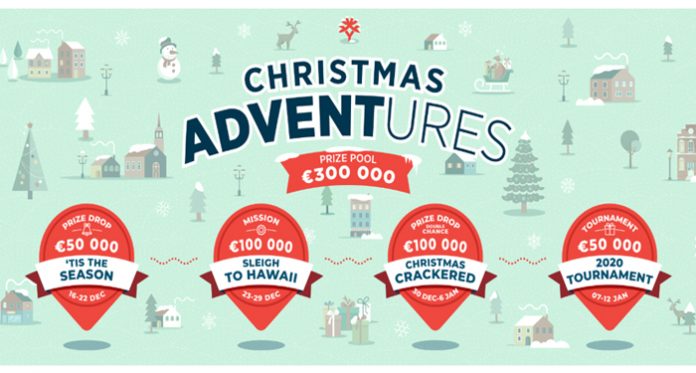 Yggdrasil Gaming is wasting no time to spread some holiday cheer! The premium slot and casino content provider is bringing the season of good tidings with the launch of its Christmas ADVENTures promotion. Starting December 16th through the 12th of January, Yggdrasil will be handing out more than €300,000 to players. The advent promotion will run in three separate stages with the first one, ‘Tis the Season Prize Drop’ being worth €50,000 with more than 680 prizes given away from playing several of Yggdrasil’s popular titles including Sahara Nights, Aldo’s Journey, Tut’s Twister and Vikings Go Wild, just to name a few.

The second phase of the festive fun-filled campaign will offer €100,000 including an all exclusive holiday for two to Hawaii. This part of the promotion is titled Sleigh to Hawaii. Santa will drop down gifts when playing Valley of the Gods, Vikings Go To Hell and Vikings Go Berzerk.

The third stage, titled Christmas Crackered, will offer €100,000 and will run from December 30th through January 6th. Players will have a chance to receive double chance prize drops with a vast selection of Yggdrasil titles.

Ring in the New Year with the fourth and final stage of the giveaway with the 2020 Tournament. There will be €50,000 up for grabs when you show off your skills playing Jackpot Raiders, Dwarf Mine, Golden Fish Tank and Casino Cosmos.

SoftGamings Partners up with Pragmatic Play