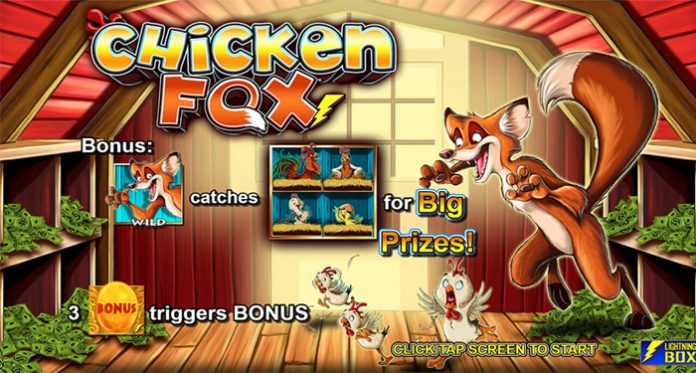 Lightning Box, online slot specialist, announced the release of its latest creation, Chicken Fox. Chicken Fox is a quirky themed 3×5 slot that is themed around every farmers’ worst nightmare, a hen house invaded by the fowling fox.

Feathers will be flying the during your entire game play from the minute you launch the game with the barn yard filled with old goats, farmer’s wife baking up some apple pies meanwhile the fowling fox waiting in the dark to pounce on his prey. The bonus feature of the game is based on the fowling fox chasing the chickens. The bonus can award up to 66x per each symbol he catches, or reward free spins and other huge wins. There’s tons of winning combinations to be had with every spin of the reels having the potential to boost your bankroll.

Lightning Box is thrilled to finally launched the comical and entertaining slot. The gaming specialist hopes that the game will be a great performer just like the rest of its content. With the fun and exciting features, Lightning Box hopes players will love and enjoy the game while chasing chickens across the reels.

Get a Taste of China with BF Games’ Latest Slot Release