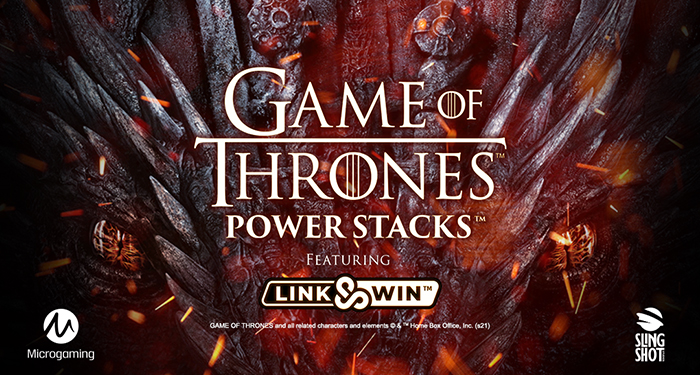 ISLE OF MAN, 10 August 2021 – Microgaming has joined forces with Slingshot Studios to present a thrilling return to Westeros in the brand new licensed online slot, Game of Thrones™ Power Stacks™.

Fan favourites from the show, including Jon Snow, Daenerys Targaryen, Sansa Stark, the Night King and Tormund Giantsbane, make up the game’s high symbols as players are brought right back into the fray as they battle for the Iron Throne.

This five-reel, 40 payline game introduces Power Stacks™, a thrilling feature available in both the base game and free spins. On every spin, the Power Stacks™ indicator flips to reveal a different symbol that could land super stacked for that spin, unveiling a fiery win potential.

When three scatters land, 15 free spins are awarded and players are transported to the foot of the Iron Throne. Not only do free spins feature wild symbols stacked on every reel with all wins doubled, the adventure is brought to life with the theme song from the iconic HBO series.

Game of Thrones™ Power Stacks™ also features the Link&Win™ bonus feature, triggered when six or more coin symbols land and lock in place, leaving all other symbol positions to spin out independently for three free respins. Respins can be re-triggered by any additional landed coin, and all coin symbol values pay out at the end of the feature. Landing a full screen of coin symbols triggers the Valyrian prize, which awards 2,500x the total bet in the base game, or 5,000x the total bet in free spins.

With a win up to value of 25,000x, Game of Thrones™ Power Stacks™ is an exciting journey for slot players and fans of the series alike.

Game of Thrones™ Power Stacks™ is available exclusively to operators on the Microgaming platform from 10 August 2021.

Andrew Booth, Director of Games at Microgaming, said: “We’re thrilled to add another Game of Thrones™ slot to our legendary offering with the inclusion of the new Power Stacks™. Combine that with the Link&Win™ feature and atmospheric sounds, players are sure to pledge their allegiance to House Stark, House Targaryen, House Lannister or House Greyjoy.”

Richard Vermaak, Head of Studio at Slingshot Studios, added: “As a fan of this iconic brand, I’m very excited for players to experience Game of Thrones™ Power Stacks™. I hope this slot fills a hole for those missing each nail-biting episode to see what happens to their favourite characters, with Drogon making an appearance when a big win occurs!”

Halloween Lovers Will Appreciate the New Book of Blood Slot