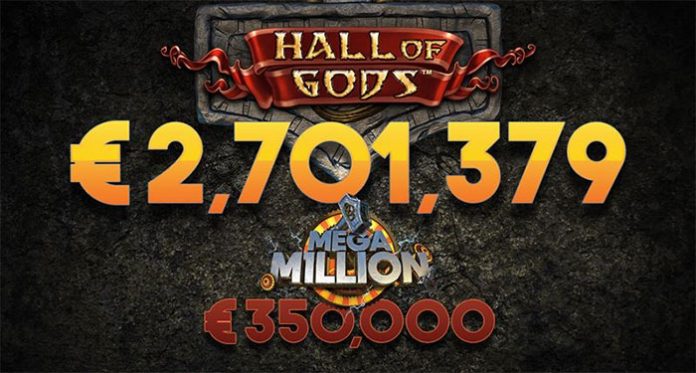 Net Entertainment did it again! They made another online player and instant millionaire last month. The lucky player won his millions playing one of Net Entertainment’s most popular jackpot games, Hall of Gods. The anonymous Finnish player banked Euro 2.75 million playing just Euro 2 a spin.

“We have had three seven-figure jackpot wins this month alone and I am confident we will see more before the end of the year.”

NetEnt just paid out Euro 1.4 million and 4.25 million with their Arabian Nights and Mega Fortune Dreams slots. This makes the year to date total, so far, 8.

Not only did the lucky Finnish player bank himself his own multi-million jackpot, but with Net Entertainment’s current Mega Million campaign he gets to take home an additional Euro 350,000. This exclusive promotion rewards Hall of Gods and Mega Fortune Mega jackpot winners additional prize money for landing their very own progressive payout.

Hall of Gods is a is a 4-reel, triple jackpot video slot where Norse mythology becomes reality across the screens with expanding wilds, pick win feature, and the progressive jackpot bonus match win game.