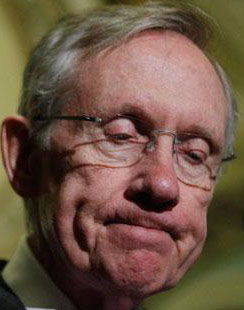 What happens in Vegas stays in Vegas so the saying goes, but when allegations of illegal activity and political corruption are in question, there are no boundaries or borders. The November mid-term elections are over, Senator Harry Reid won his bid for re-election, and everything was right in his campaign world, for about a day. That’s when allegations of improper harassment, possible violations of federal campaign finance laws and intimidation tactics were used to win Reid’s seat.

It’s been reported that just two days before the mid-term elections Harry Reid was not in a good position to win his Senate seat because opponent Sharon Angle was ahead by 3 or more points according to political polls. However, when all votes were counted, Harry Reid’s campaign managed to pull out a win with a six-point margin, which was a surprise to most. However, some have reported that it was no fluke; it seems there are accusations that both the Reid campaign and Harrah’s Entertainment delved in dirty tactics by addressing Harrah’s employees with intimidation to make sure they voted for Harry Reid. Hans A. Spakovsky the former Federal Election Commissioner explained that it’s illegal for officials in a Senate campaign to coordinate with any corporations or unions. Harrah’s and the Reid campaign may have violated federal laws, which prohibit contributions from corporations or unions for political campaigns. Backing a campaign is one thing but making direct in-kind contributions are not allowed.

Another accusation involves the intimidation and coercion of a person’s right to exercise their right to vote or not. This comes from the allegation that an email, {which I read, but have no idea how true it is) was sent to Harrah’s brass from the Reid camp telling them to make sure “the employees” at Harrah’s understand how important it is that they get out there and vote for “Senator Reid”. Stating it would be a sad day on Nov. 3 to wake up and find Reid not their Senator. The email was sent to Marybel Batjer, Harrah’s Vice President for government relations, to do everything possible to make sure the thousands of employees “and their families” get out to vote for Harry Reid, including putting a “headlock” on recalcitrant supervisors “to get them to follow through” and Batjer in response told all Harrah executives to do whatever they had to, to get employees to vote.

In the Harrah’s circle of supervisors, there are some who decided not to follow through with the intimidation and especially in the midlevel culinary department. One Harrah’s executive complained in an email that some supervisors were not cooperating with upper management and will not take part in the “get out the Reid” vote campaign. Because these allegations include intimidation and coercion, they need to be investigated by the Department of Justice’s Public Integrity Section. Attorney General Eric Holder needs to realize the House Judiciary Committee will be watching closely actions taken on this matter.

In a time when online gambling needs a hero, someone who can back Barney Frank and get the HR2267 bill passed, we thought we had an ally with Harry Reid, but if its proven there was illegal tactics used to win his Senate seat, do we really want that kind of help and reputation in a fight that’s already been given unfavorable and completely unfounded descriptions? We will have to wait and see where this story goes, and how it turns out to find out what it will do to the fight for legalized online gambling in the US.

Alderney on the Defense against British Statements on Player Protection