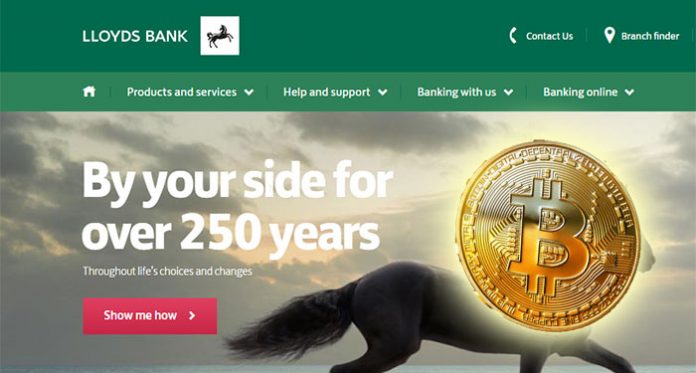 After Bitcoin has seen a decline in the recent weeks Lloyds Banking Group in the UK has put a stop to its customers from purchase the digital currency with credit cards. Bitcoin value was declining but gaining its momentum back until Lloyds Banking made its announcement, so industry analysts are wondering if this decision is or will have a bigger impact on the value of the cryptocurrency.

The BBC reported that the halt of using credit cards applies to all customers of MBNA, Halifax, Bank of Scotland and Lloyds Bank, and is effective immediately. Customers are permitted to use their debit cards if they wish to purchase the digital currency.

A spokesperson for Lloyds Banking Group said, “We continually review our products and procedures, and this is part of that.”

Lloyds Banking Group made the announcement right after Facebook announced they will block any, and all advertising that promotes digital currencies services or products. Bitcoin can’t afford, or investors rather, to see a plummet of its value. With Bitcoin seeing record highs one month, then fall by 30% in its worst week in about 4 years the certainty of its current state is unknown.

Bitcoin Deposit Bonus at Slots.lv – Get $7,500 in Match Bonuses

Start Your Week Off with a Reload Bonus at 7Bit Casino