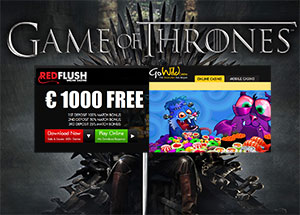 One of the most exciting games we are looking forward to is the upcoming release of the new branded slot, Game of Thrones®. Back in February Microgaming announced the collaboration with HBO that they had signed a licensing agreement to develop the online slots based on the award-winning and epic HBO® television series.

If you are like the millions that have read the books, watched the series and followed along attentively to the social frenzy of the HBO drama, then like us you are indeed die-hard fans of the hugely successful epic drama.

If you are unfamiliar with the HBO series, it is based on the best-selling books “A Song of Ice and Fire,” by George R.R. Martin and  follows the rise and fall of kings and queens, knights and renegades, liars and noblemen as they vie for power and a chance to sit on the Iron Throne of Westeros.

Roger Raatgever, CEO of Microgaming, stated in the press release that the new slot is slated to feature some of the most magnificent features that captivate audiences weekly during the shows seasonal airings. Plans to incorporate “features of the small screen fantasy epic to create a masterpiece of a slot” were his exact words and on a scale of 1 to 10 this new slot may very well blow Jurassic Park™ out of the lead for contender slot of the year!

With a mix of drama, adventure and fantastical creatures, the plot twists and diverse characters can certainly inspire a slot that is both innovative and interactive. We would expect nothing less than integrated scenes and sound bytes from the series as well as new enhanced 3D features. But this is a wishlist of sorts as a fan of Game of Thrones and Microgaming.

We are longing for interactive bonus rounds that utilize popular characters to propel the game on new levels, awarding bigger prizes and a perhaps a larger jackpot. The new Game of Thrones slot can really raise the bar on online slots and propel the classic style fruit machines to an entire new genre if done correctly.

Online casino’s GoWild and RedFlush are already releasing that they plan on including the highly anticipated slot to their line up award-winning Microgaming casino games. In recent newsletter from GoWild the casino hinted with, “HBO’s hit series Game of Thrones® has captivated the hearts of fans across the globe and players will soon be able to enjoy it at GoWild! Are you ready for this?”

And the always stylish RedFlush released a statement announcing the slots release in December 2014, updating players of the exciting news and welcoming them to log on and give additional Microgaming slots a try. Red Flush in addition made a bold statement, saying, “The Game of Thrones online slot will without a doubt join the ranks of masterpiece slots such as The Dark Knight Rises, Thunderstruck II, and Jurassic Park.”

If your new to Microgaming slots or have never before played one of the award winning games from the Isle of MAn operator, now is the time to acquaint your self in preparation for the release of Game of Thrones®.

GoWild is currently offering “No Deposit Bonuses” on Jurassic Park™ plus 25 FREE Spins and the same “No Deposit”, 25 spins on So Many Monsters exclusively to CS Report readers.

RedFlush will welcome players with a deposit bonus of $/£/€1000 FREE in Bonus Offers for joining.

MGM Confirms the Sale of its Grand Victoria Casino-Elgin