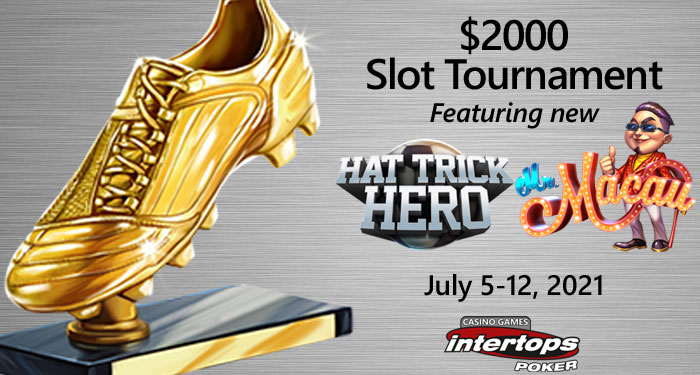 July 5, 2021 (Press Release) – There’s big prize money at stake, so competition in this week’s $2000 slots tournament at Intertops Poker will be fierce. July 5th to 12th, players will automatically earn tournament points when they play any of the four designated tournament games.

Sixteen players with the most tournament points finish in the money. The first-place player wins $400 of the $2000 prize pool.

This month’s slot tournament features two brand-new slots (Hat Trick Hero and Mr. Macau) and two player favorites (Fruit Zen and Super Sweets). The tournament games are all found under the Betsoft tab in the Casino Games section of the site.

“We have a couple of really cool new games for players to try,” said the casino manager. “We’ve also included a couple that our players always play a lot.”

Players spend a night on the town in the Las Vegas of the East in Mr. Macau, a glitzy new game featuring Sticky Wilds, Mr. Macau’s Wild Boost, Triple 7 Free Spins and a new Stick and Re-spin feature. The new game’s Wilds are sticky for two spins and Triple 7 symbols can award free spins and extra Sticky Wilds or Multipliers. If a spin doesn’t win, a random symbol can become sticky for a re-spin.

The fluffy pink cherry orchard where Fruit Zen is played may seem serene, but with an expanding Wild that increases winning combinations, it’s filled with non-stop excitement!

Sticky wilds can appear anywhere on the reels of the mouth-watering Super Sweets. When a Candy Surprise appears on the middle reels, players win either a re-spin or a ticket to the bonus round.

Not just content, but to be the hottest poker site on the Horizon Poker network, Intertops Poker has also developed a casino games section with hundreds of games from four leading games developers

Play a Huge Catalog of Slots at Bovada with $3,000 Bonus

Have Fun while Cashing In On Cherry Casino Bonuses

Bovada’s Monthly Milly Tournament , $1M to Be Won in a...