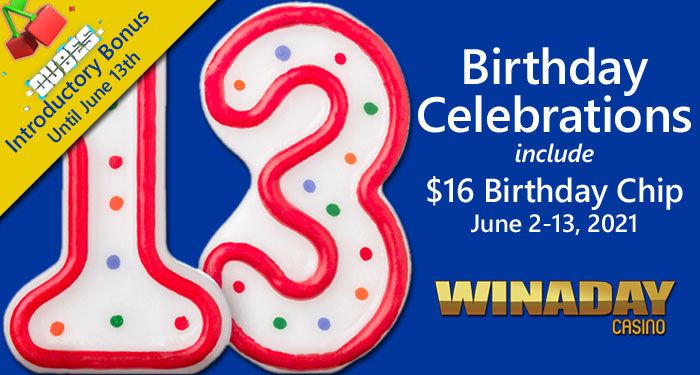 To get the party started, the unique casino is giving players a $16 Birthday Chip that they can play on any of its 57 slots. They’re also launching the new Qubes slot game this week and giving a generous match bonus to give players some extra play time on the retro-cubic game.

“Lots of people think 13 is an unlucky number,” said Michael Hilary, “But we feel very lucky indeed to have been entertaining players all over the world for 13 years!”

It’s been a busy year for WinADay. With casinos closed due to the pandemic, a lot of slots players have been spinning the reels online instead.

$16 Birthday Chip
Available to all players that have deposited at least once
Bonus code: BDAYCHIP
Wagering requirement: 32X
Max cash out: 6X
Valid for all slots.

The first new game to be launched during this month’s birthday celebrations is Qubes, a classic three-reel fruitie with a cubist graphical twist – square cherries, lemons, strawberries and grapes. Special Bonus symbols multiply wins up to ten times. Next to the main reels is a mega-reel with over-sized Mystery symbols that can be part of several paylines and pay out huge coin prizes.

WinADay was created by Slotland Entertainment in 2008. It began with just a few one-of-a-kind games and now offers a huge selection of premium slots, many tied to a site-wide progressive jackpot, and a large collection of penny slots.

The Happier the Place, the Bigger the Bonuses at Slotslv!

Everygame Poker Get Free Spins on Four Classics from Betsoft

Soar with a Fantastic Welcome Bonus at Roaring21 Casino