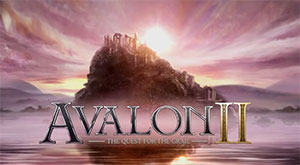 Microgaming has had an exciting month to wrap up a year of great new games like the highly anticipated and seductive Playboy, the sequel to the ever popular Dark Knight Series, The Dark Knight Returns to the jolly filled Christmas themed spectacular, Secret Santa!

A week ago, the casino gaming developer announced a sequel to the successful Avalon, Avalon II: The Quest For The Grail, an Arthurian adventure themed that is setting new precedents in the video slot industry.

The epic adventure is visually stunning, featuring five reels, 243 ways-to-win and eight bonus rounds of captivating gameplay. The behind the scenes making of video is sure to have slot enthusiasts filled with anticipation of its upcoming release in February 2014.

To get a sneak peak of the glorious new Avalon II: The Quest For The Grail, check out the BTS below. The work, craftsmanship and attention to detail is what were certain will make this one of the best new slots of 2014.

In other Microgaming news, a new winner has been crowned as Daniel Johansson was crowned the winner of MPN’s World Sit ‘n’ Go Masters (WSM). The offline tournament series for players on Microgaming’s poker network was a three day event was held in Prague from Saturday 14th December to Monday 16th December, with players from around the world competing in a series of live single table tournaments. Johansson from Sweden took home the top prize of €10,102.

“It was a great tournament and I am very happy to win. Playing four rounds of Sit ‘n’ Gos to reach the final was a real challenge. I would like to come back next year and win it again!” – WSM 2013 Winner, Daniel Johansson

And to end on an even higher note, Microgaming crowned another Mobile Casino Mega Moolah Millionaire this week as one lucky player has won a jackpot prize of €1 million. Rachael played the online slot that has been living up to its reputation of being a “millionaire maker” on her mobile device when to her surprise she hit the win of a staggering €1.08 million on the popular Mega Moolah progressive jackpot slot.

This is the second time in 2013 that the jackpot was one, back in September, Gabriel L won the largest mobile jackpot win in history of £3,744,513.

“Two mega mobile jackpot wins on our HTML5 client in just four months truly indicates the growth of mobile gaming. So far this year, Mega Moolah has paid out over €171 million on mobile devices; that’s an astonishing amount! No doubt this number will increase year-on-year as more and more players look to play their favourite games on their mobile and tablet devices.” – Neill Whyte, Head of Product Channels at Microgaming

Explore the New Ariana Slot, BitCoins and a Trip to Dubai