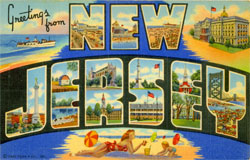 The casinos allowed would be the licensed casinos in Atlantic City, part of Lezniak’s ongoing effort to revive the New Jersey gambling scene. Lezniak is also involved in efforts to legalize sports betting and regulate online poker.

The suggested law would require servers to be located within Atlantic County, either on casino property or in a secure location operated by an Atlantic City casino. All casino games legal at Atlantic City resorts would be available, including poker.

The bill would allow residents to establish an account and then play at online gambling either from personal computers, or at terminals to be located at state racetracks, giving both racetracks and casinos a chance to successfully pool customers. The terminals may be virtually the same as slot machines.

Lezniak would create a regulatory Division of Internet Wagering under the Casino Control Commission, which would watch over the new industry. Taxes would be set at 20 percent of gross revenue from the online casino gambling.

Despite the US Department of Justice defying courts and asserting that all online gambling is illegal, New Jersey joins a slew of states debating plans to run Internet gaming inside state borders, including Maine, California, and Florida. Illinois already operates legal and regulated online gambling.
Published on January 17, 2010 by Tom Weston