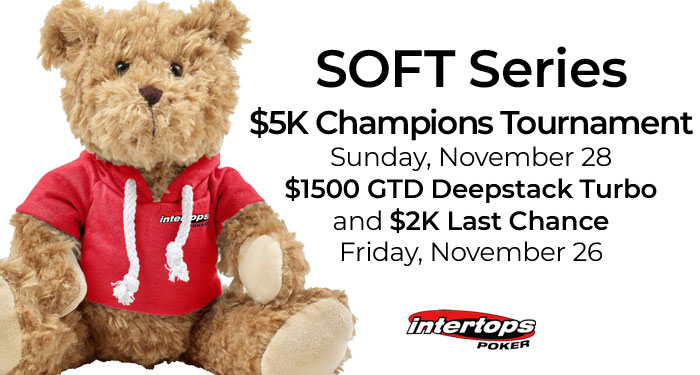 November 26, 2021 (Press Release) — After 29 events and nearly $70,000 in guaranteed prize money, the SOFT Series poker tournaments at Intertops Poker are coming to a dramatic conclusion Sunday night with the $5000 GTD Champions Tournament.

All players at the final table won their ticket by winning one of the previous events in the series. There are two final opportunities to win a ticket to this event on Friday tonight: the $1500 GTD Deepstack Turbo at 5:00 Eastern and the $2000 GTD Last Chance tournament at 8:30 pm Eastern.

“I started to feel like I might just win it not long after heads up started,” said a player known as Gunnerboy who won Event 4, a $2,000 GTD R&A tournament. “The other player lost internet connection and I just blinded them out. Cruel end — but I’ll take it!”

“Turns out my smartest play during that game was when I folded AK based on a gut feeling and then one of the other players got an Ace high straight,” he said. “Winning a tournament like this takes patience and confidence. Don’t be in a rush to use your chips but if you do, bet like you just don’t care. It scares people!”

“The field was pretty soft, but there were a few good regulars,” said ClownUpGuy who won Event 13, a $3000 GTD Progressive Bounty tournament. “I’m going to buy crypto with some of my win. The rest will go toward buying a Lambo!”

His advice to other players: “If in doubt, always raise!”

The SOFT Series included bounty tournaments, deep stack and super stack events, and two free rolls. With guaranteed prize pools up to $15,000 and buy-ins as low as $7, this series has attracted lots of casual players. It’s been a great opportunity for recreational players to get a shot at some nice prize money.

Intertops Poker hosts the most active poker room on the worldwide Horizon Poker Network, attracting all kinds of players from all over the world. It also has hundreds of slots and table games from four leading games providers in its Casino Games section.