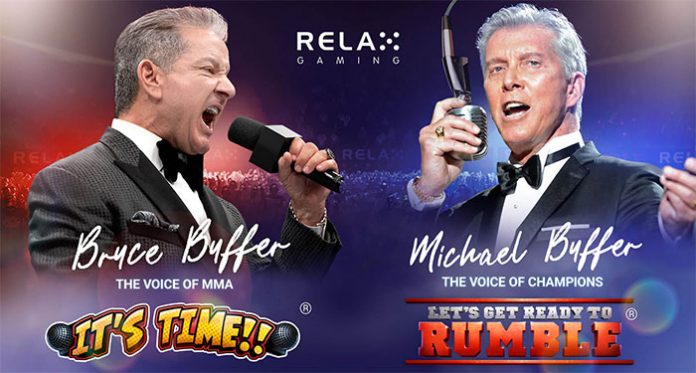 It’s like Christmas morning every day in the online gaming industry with the launch of new games being released just about daily! Especially with Relax Gaming, they have launched more new games lately than any other content provider. The content and distribution provider announced the release of not one, but two brand-new slot titles this week. Relax decided to step up their game, not that they needed to, with creating two new branded Boxing and Mixed Martial Arts games. The two new MMA themed titles are It’s Time and Let’s Get Ready To Rumble.

The games are both iconic with world-famous ring announcers ‘The Voice of Champions’ Michael Buffer and ‘The Voice of MMA’ Bruce Buffer. Michael and Bruce, brothers and famous for their deliverance of their famous catchphrases, are thrilled to offer their capture of essence with teaming up with Relax Gaming and creating the first network branded titles.

Bruce Buffer told Relax that, “Sports fans, especially those keen on Boxing and MMA, will have the opportunity to strive for greatness with two games that promise to deliver. To sports and gaming fans everywhere, we look forward to seeing you in the ring!”