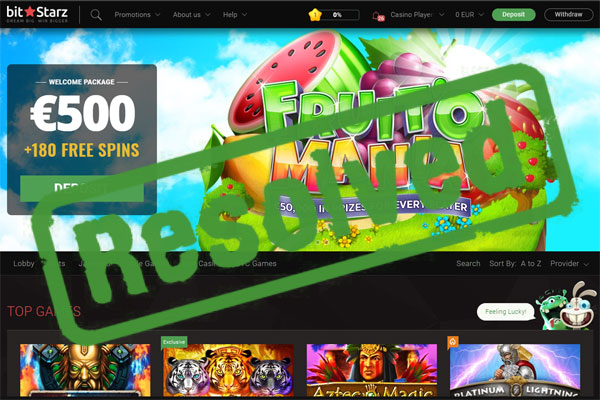 We received a payout complaint from a player at Bitstarz Casino a couple weeks ago and after working with Bitstarz on resolving this issue, it became very clear that the player was more interested in complaining than trying to actually get her winnings.

Below is her complaint…

I made a deposit via etransfer and won $1700. I made an attempt to withdrawal after submitting required documentation only to have it not approved. I was sent an email stating my license was not approved because it expires in less than 3 months… My license expires on my birthday of this year (2019) which is in late October. I opened a live chat session and asked for an alternative withdrawal method and the gentleman i spoke with suggested depositing from my ecopayz account then withdrawal it back into my ecopayz account. I did that and still wasnt approved. Now my other documents weren’t clear enough to be approved. I sent a phone bill..it was approved. I sent a screenshot of my etransfer history to show proof of deposit and it wasnt approved because “it was too small and not clear enough”. I zoomed in and resubmitted only to have it not approved again because it was cropped and i was told it didnt say “bitstarz” on my etransfer history. I called my bank and the only information my account will show is the email address i e-transfered to (gigadat)
Im extremely frustrated and just want to withdrawal my winnings.

When we heard back from Bitstarz they informed us that the players drivers license was only valid for 4 months (from issue date to expiration date). This seemed very suspicious. After speaking with the player about this, and finding out it was a reissued DL, the casino appeared to be willing to overlook it. What they still needed was a clear copy of her deposit with her e-wallet. There was also the issue of multiple account names using her credit card.

Anyway seems this route of help (meaning Casino Players Report) has lead me down another dead end, thanks for looking into things for me Rick. Take care, Katie

And that was it. She asks us for help and then as soon as we start to give it, she decides that we aren’t giving her the help she needs when we were clearly doing everything we could to resolve the payout issue and so was Bitstarz.

This complaint is marked as resolved in favor of the casino.