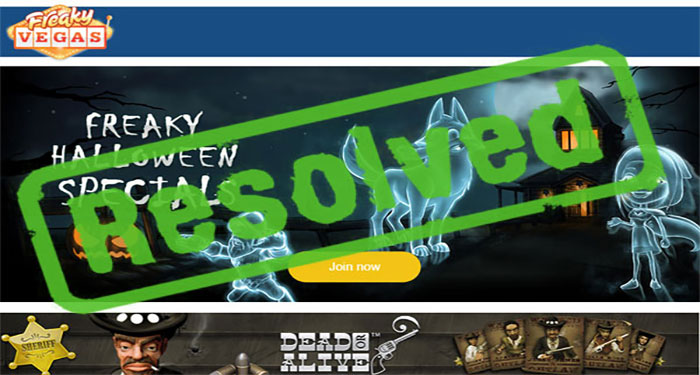 This past week a complaint was filed about Freaky Vegas Casino (FreakyVegas.com). The complaint stated that the casino had not only failed to pay the player via his VISA card but also lost the money after it was declined by the processor.

They have been unable to answer my questions and so much more. On 2018/09/18 the dates on both of my withdrawals were changed from 2018/09/07 to 2018/09/18. Which according to the support, was due to my withdrawals would be handled by their department and that I could expect my withdrawals very shortly.

So it took them 11 days to start managing my withdrawal request despite it in their casino terms under Deposit, Transfers and Withdrawals and under number 9. it says the following:

9. FreakyVegas.com will do its utmost to process any withdrawal requests between 6 and 12 hours on working days from receipt of such request.

It was first around 2018/09/21 that FreakyVegas chose to process one of the withdrawals (1900 SEK), but that withdrawal was suddenly denied without me being informed of it – and according to FreakyVegas, my withdrawal was all of a sudden denied due to a failure when trying to pay out the money to my Visa card they say.

I had to question the customer service several times why the withdrawal had been denied before I got an explanation.

But instead of the money (1900 SEK) going back to my cashbalance at the casino, they have managed to lose the 1900 SEK somewhere in the process of the denied withdrawal. And all that I’ve heard from them is full of excuses and that they have forwarded the case to another department to find out where my money has ended. But now 18 days later, the money is still gone and they still can not give me any answer or an explanation of where the money have ended up or what happens to my other withdrawal of 1500 SEK that is still a pending withdrawal.

I contacted the support on FreakyVegas once again on 2018/10/03 to ask them what s happening with my withdrawal of 1500 SEK as well as the money 1900 SEK that is still missing from my account – and also to express my frustration regarding this problem, and the only answer that I got from Max on the support was the following:

I understand your frustration and your issue has been forwarded with high-priority. We will get back to you via email as soon as possible.

I assure you we are doing our best and will get back to you as soon as there is any update or solution. Until then I am asking for a little more patience please.

We contacted Freaky Vegas Casino and they informed us the complaint has now been resolved.

This is the outcome addressed to the player:

I’d like to extend my sincere apologies for this delay and inconvenience as you should not have been affected on your end for the issues that the payment gateway is experiencing.

And just to clarify we approved and attempted processing withdrawal as soon as possible, however in this case our finance dept. kept on experiencing an error in trying to do so.

Only feedback we got so far from our payment gateway provider is that of “wd was declined due to a configured rule on the cc”.

We’re still awaiting further information from them as we speak, however as soon as this was brought to my attention we have credited your funds back to your account, so that you can move forward with requesting withdrawal via an alternative payment method.

Let me know if that’s possible for you and feel free to get in touch with me on [email protected]­fre­aky­veg­as.com .