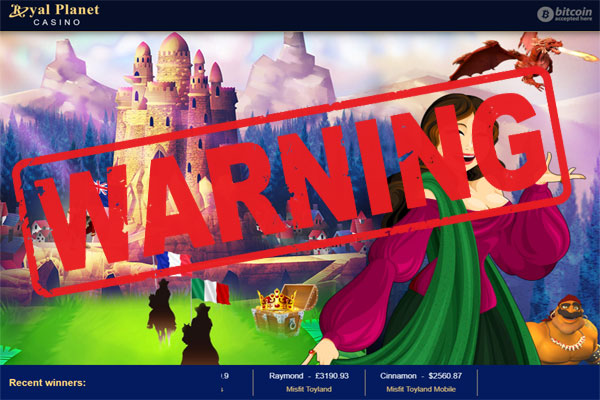 This is a complaint we received about royalplanetcasino.com…

I would like to lodge a complaint against royal planet casino regarding money I won..
After sending off all my documents.. Then also was asked debit card authorisation form to be completed and signed and confirmed it had been received.. Then been told repeatedly it’s being processed. When this isn’t true..nearly 9 days and This withdrawal is still showing as pending.. And now no one is replying to my emails.. Live chat isn’t working. Neither is their contact number!
I am feeling very deflated and losing hope.. I have made several deposits to this site so was such a joy to actually win something

I don’t know what else I can do?

We contact Royal Planet Casino and this was their reply…

We then passed their reply on to the player and apparently they still have not paid out the winnings owed.

Still no updates and money is still pending.

We tried to contact the casino again but they no longer respond to us and the player has still not been paid.

If you choose to play at Royal Planet Casino, chances are your payment will be severally delayed or you might not get paid at all. Best to play at one of our Approved Casinos instead.