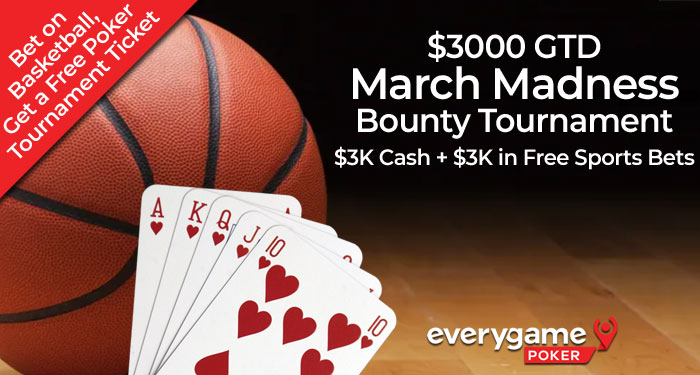 Everygame players can use the same account for sports betting, casino games and poker. Everyone that places a minimum $10 bet on any 2022 NCAA Division I men’s basketball game gets a free ticket to the March Madness Bounty Tournament on April 10th. In addition to $3000 in prize money, the top 16 players in the poker tournament will win a total of $3000 in free sports bets.

The March Madness Poker Tournament is a bounty tournament. Players will get another free $10 sports bet for every player that they eliminate from the competition.

Qualifying customers will automatically have their tournament entry paid and their accounts registered for the tournament.

March Madness is one of the biggest and most exciting sports events of the year.  68 college basketball teams compete for the NCAA (National Collegiate Athletic Association) national championship. The Final Four play off April 2nd and the Championship game is two days later.

A second series of satellites for the €300,000 Malta Poker Festival begins Wednesday, March 30th and continues until the Final on April 10th. $1 Step 1 satellites held seven times a day each award a Step 2 ticket. Step 2 winners get tickets to the Final. The champion wins a $2500 prize package that includes tournament buy-in and luxury accommodation.  They’ll join last month’s satellites winner in Malta for the Festival’s €300K Main Event, April 29 to May 2.  Everygame Poker is the busiest poker room on the global Horizon Poker Network. It also has a growing casino games section with slots and table games from four leading games providers.

Enter to Win a Chance at the Ultimate Superbowl Experience