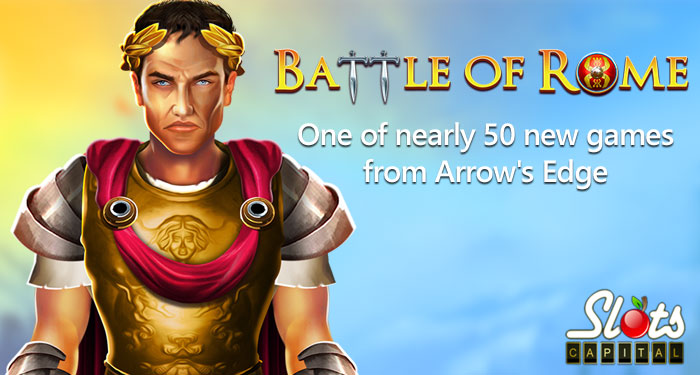 January 20, 2022 (Press Release) — To complement its massive library of games from Rival Gaming, Slots Capital Casino now has slots from Arrow’s Edge as well. The new partnership brings dozens of new games including the new Battle of Rome.

To introduce players to the new library, the casino is giving $10 free play on Battle of Rome until the end of the month. A special Welcome Bonus offer — 1000 free spins on the new Fairytale Fortunes — is extended until the end of January.

In the epic Battle of Rome, the Emperor rewards soldiers with prizes and free spins. Features like Bidirectional Paylines and a Progressive Jackpot provide colossal payouts.

Paying both left to right and right to left, Bidirectional Paylines double the number of paylines creating 3125 chances to win on every spin.

Battle for Rome is linked to the Cash Grab progressive jackpot which can randomly award up to $5000.

Battle of Rome is one of the more than 50 new games from Arrow’s Edge that have just been added to the casino. Founded in 2014, Arrow’s Edge is a top provider of online games for mobile and PC players. Its “Super Slots” are linked to large network progressive jackpots. Many of its games feature its smaller but frequently hit Cash Grab jackpots.

$10 FREE PLAY ON BATTLE OF ROME
No deposit required
Bonus code: ROME
Players can cash-out up to $180
New players that have not redeemed more than one no-deposit bonus are eligible

Inspired by Alice in Wonderland, Fairytale Fortunes – Queen of Hearts from Rival Gaming is a 6-reel slot with 4096 paylines. A grinning Cheshire Cat is the Expanding Wild symbol that multiplies wins up to 5X. Three or more Knave symbols start the Stolen Tarts Bonus Round where players click on tarts to reveal instant coin prizes.

The 1000 free spins are in addition to Slots Capital’s regular welcome bonuses.

Slots Capital Casino offers a huge selection of real money online casino games and is known for its generous rewards programs. Players earn Comp Points that can be converted to cash and VIP players are pampered with exclusive personalized offers, huge bonuses, and the highest care.