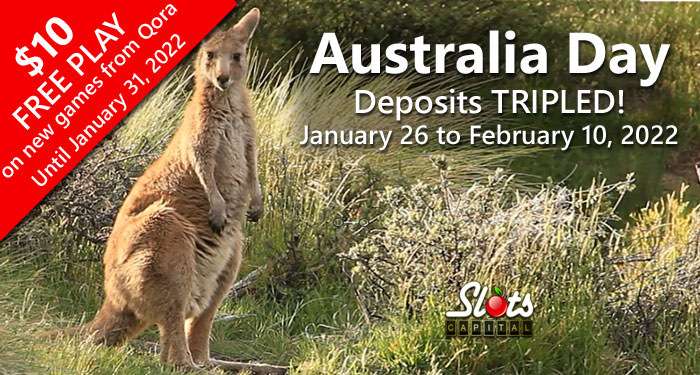 January 26, 2022 (Press Release) — January 26th is Australia Day, the biggest party of the year in down under. There will be festivals, concerts and citizenship ceremonies in every Australian community in every state and territory, and there will be celebrations of all things Australian all over the world.

Slots Capital Casino is celebrating with its Australian friends by tripling deposits to give extra holiday play time.

“Sure, I’ll be putting another shrimp on the barbie, mate,” laughed the casino’s blogger, Slots Lotty. “Gimme a minute though — I’ve got a lot of new games to try first!”

“On Australia Day we celebrate all the things we love about Australia: land, sense of fair go, lifestyle, democracy, the freedoms we enjoy but particularly our people,” the NADC says on its website. “From the Aboriginal people who have been here for more than 65,000 years, to those who have come from all corners of the globe to call our country home.”

Slots Capital recently added dozens of new games from Arrow’s Edge and many more from Qora. Until the end of the month, they’re giving new players $10 free play on the new Viking Treasure or Galaxy Stars, both from Qora. They can win up to $180 during free play.

Available to new players that haven’t claimed more than one no deposit bonus.

In Viking Treasures, scatters trigger 10 free spins with Locked Wilds. The space-age Galaxy Stars features Nexus symbols that multiply wins up to 8X and Blazing Wilds that stick then move left after each spin.

Take the Prize of a Daily Prize Pool at Cyberspins Casino

It’s Time for a Super Starz Adventure at Bitstarz Casino!