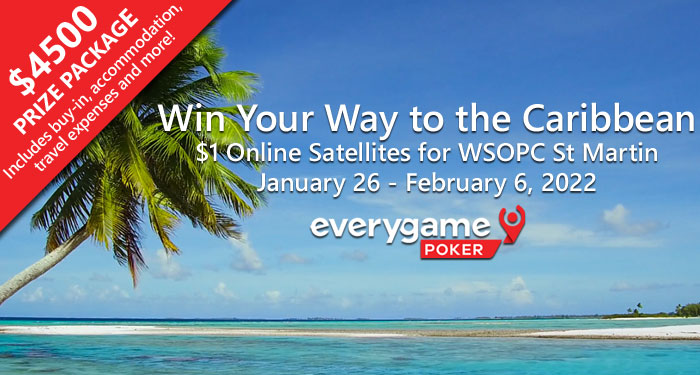 Another satellite series starts today (January 26th), another $4500 prize package will be awarded February 6th, and another Everygame Poker player will be at the table in St Maarten in April.

The winner of the first satellite series is a 33-year-old Hungarian known as ‘SharkyKata’. He’s been playing mostly tournaments since he registered with the poker room two and a half years ago. The final heads-up match was between him and another regular tournament player at Everygame, Twitch streamer ‘2fit2fold’. SharkyKata won with a Full House.

Like SharkyKata, the winner of the next Final on February 6th will receive a $4500 prize package that includes the $1700 tournament buy-in, 5-nights i at the all-inclusive Sonesta Maho Beach Resort, $600 toward travel expenses, a $100 cash game buy-in and more. They’ll compete face-to-face for $200,000 in guaranteed prize money.

Half French and half Dutch, St. Maarten is known for its beach at the end of a runway. With lots of great clubs and restaurants, it’s a very popular stop on the WSOPC circuit. The $200K Main Event begins April 1st and concludes April 4th.

WSOPC Caribbean 2022 SatelliteS Schedule
Players can win their way to the Final or buy in at any step.

Everygame Poker is the main poker room on the busy Horizon Poker Network. It also has a growing casino games section with slots and table games from four leading games providers.

Enter to Win a Chance at the Ultimate Superbowl Experience