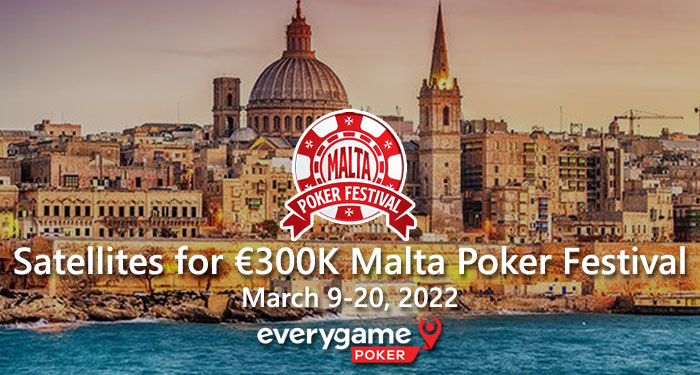 March 9, 2022 (Press Release) — Satellites for the Malta Poker Festival begin today at Everygame Poker. The winner of the series will play in the €300,000 Main Event in Malta April 29th to May 2nd.

$1 satellite tournaments will be held seven times a day until the Final on May 20th. The winner of that game will receive a $2500 prize package that includes buy-in for the Main Event in Malta, luxury accommodation, meals and invitations to exclusive player parties. Winner of Final on March 20th awarded $2500 prize package.

Players can buy-in to play in the Final or win their way to that event in daily satellites.  Winners of Step 1 tournaments win tickets to any Step 2 tournament. Step 2 winners get tickets to the Final.

The Malta Poker Festival will be held at the Portomaso Casino in the heart of the island’s vibrant nightlife.  The Festival attracts ex-pats now making Malta their home and all kinds of players from all over Europe and beyond. Off-felt activities include a grand finale party. The week-long event culminates in the monster No-Limit Hold’em Grand Event with a guaranteed €300,000 in the prize pool.

“I’ve travelled to lots of tournaments with the Everygame team,” said Tim O’Keefe, one of the casino’s sponsored players and Twitch streamers. “It’s great being with a group you can share your triumphs with — and sometimes it’s nice to have a shoulder to cry on!”

MALTA POKER FESTIVAL SatelliteS Schedule
Players can win their way to the Final or buy in at any step.

Everygame Poker is the main poker room on the busy Horizon Poker Network. It also has a growing casino games section with slots and table games from four leading games providers.

Play Monday’s/Tuesdays for a Chance to Win $1,400 in Cash

Take the Prize of a Daily Prize Pool at Cyberspins Casino

Get a 100% Payday Treat Slots Bonus at Slots Ninja