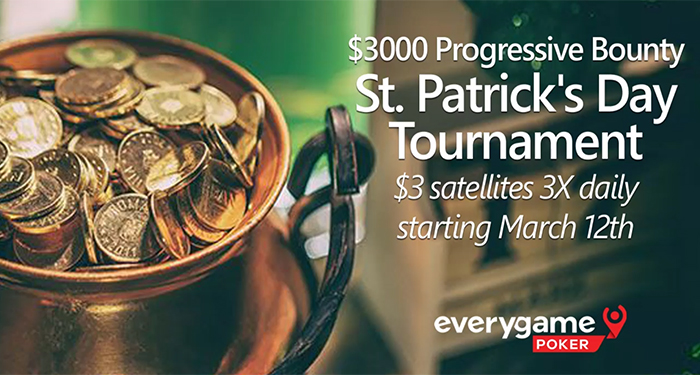 Every player will begin the game with a $25 bounty on their head. Since this is a progressive bounty tournament, or progressive knockout tournament, players collect half of the bounty when they knock a player out and the other half is added to their own head.

“The price on your head goes up as you knock out your opponents,” said Everygame Poker’s manager. “But if you bring the luck of the Irish to the table, that bounty may never be collected!”

St. Patrick’s Day is a global celebration of everything Irish. Celebrations generally involve public parades and festivals and the wearing of green attire or shamrocks. Green beer is the drink of the day — and poker is the name of the game.

Satellites for the €300,000 Malta Poker Festival are also underway until March 20th. The winner of that series will receive a $2500 prize package and compete in the Main Event in Malta April 29 to May 2.  $1 Step 1 satellites held seven times a day each award a Step 2 ticket. Step 2 winners get tickets to the Final. Malta is a beautiful Mediterranean island and the Portomaso Casino where the tournament is held is right in the heart of its vibrant night life, so the Malta Poker Festival is a favorite poker destination for European poker players.  Everygame Poker is the main poker room on the busy Horizon Poker Network. It also has a growing casino games section with slots and table games from four leading games providers.

Find Your Valentine When You Join Red Stag’s Western Romance

Play Piedra Del Sol with a 50% Reload at Bitstarz