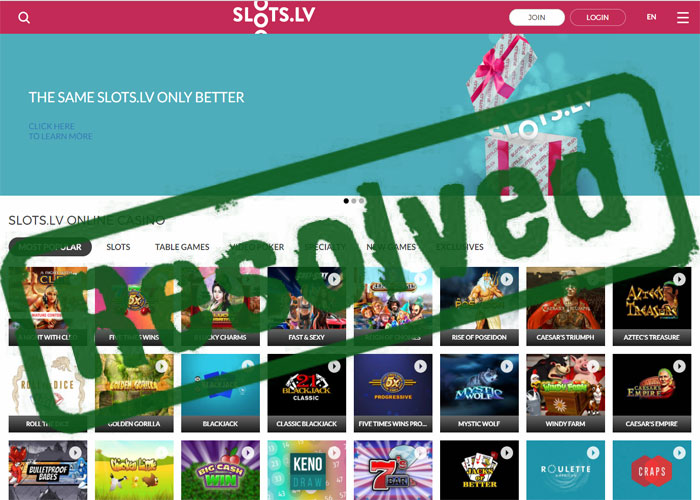 We received this complaint from a player at Slots.lv casino…

The casino told me since I registered to the casino with the card ending in 1880 i had to produce and send a copy of that card. I told them that was impossible due to it being lost so I was told by the casino to produce anything with my name the banks name and the debit card 1880 and it would be no problem. I said fine and called my bank for the information.

I was told that banks do not do that or at least USAA because like when debit cards are lost or stolen a replacement card can be issued to your existing account. So the two numbers are NEVER recorded together.

I explained the situation to them and to helped me the researched my account and found a letter to me stating the card 1880 was going to be reimbursed for four fraud withdraws.

A regular statement page further down it shows the four debit refunds the letter had talked about to the second. No way to fake a bank statement to the second corresponding with the bank letter.

A week and a half goes by and I am told they were backed up but would get to me and also the letter that had explained about the four fraud claims that were going to be reimbursed to me at the top of that letter. It shows subject from USSA bank subject temporary credit  deposited to me xxxxxxx from USAA<USSA .WEB xxxxxxx [email protected] mailcenter .USAA.com.

So after waiting week and a half to two weeks I get an e mail saying first I need to produce a copy of the debit card front and back starting it all over again. They must of realized what they had done.  A little while further down my email  i was told the letter i produced did not have the company logo on it so i could of wrote it which is impossible because it corresponds with my bank statement.

I called them up talked to a manager and was told they were doing it for my safety as for me to prove who I am. I sighed into the casino with the right password they took my money out of the account with the card ending in 5835.

My account my name on the card they ask me to send a copy of my drivers license. I did with my name address same as with the card ending in1880 a picture of me on the drivers license they asked me my security question I gave them all the right answers mothers maiden name my birth date. Produced the bank statement and the bank letter as what they asked for and after waiting all this time.

I am told the letter from the bank did not have a bank logo on it i have copies of all the things i explained in this letter.It is obvious they just do not want to honer there pay out can you please help me with this what a rip off company how could they possibly have a 4 star rating THANK YOU Douglas

We contacted Slots.lv and received this prompt reply…

So I received an update about this – thanks for your patience!

The issue with the documentation has been resolved. The player will no longer have to submit documents for the old card.

I’ve explained the situation to Slots.LV Support and they will be contacting the player about the issues and also about his payment.

If you need anything else, please let me know.

We contacted the player to confirm that he had in fact been contacted about his payment and we never heard back so we are marking this complaint as resolved.