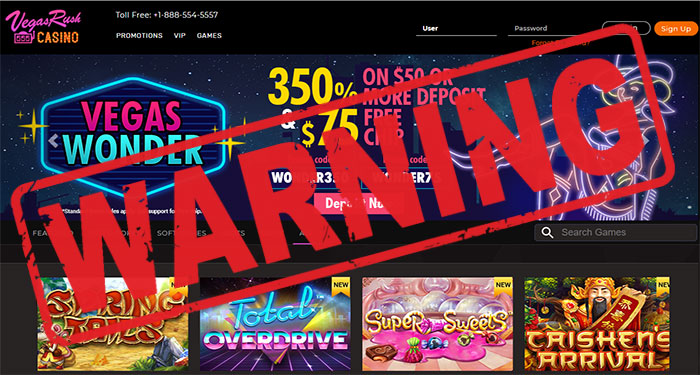 We received the below complaint from a player at Vegas Rush Casino. Let this be a warning for anyone thinking about playing there. They can lock your account, make up an excuse why they locked your account, and steal your winnings anytime they feel like it. Avoid this casino.

I made a couple of deposits at the casino and managed a withdrawl of about $1000 and eventually I was paid this after 19 days and a lot of chasing them up. I then made a deposit of $800 and lost that and then I made a smaller deposit of $182 and got very lucky and managed to get the balance up to over $8000. I requested a withdrawl of $2000 as that is the weekly limit and after a couple of days I got an email saying my withdrawl was cancelled and my account closed and got zero other info.

I chased this up on live support and they started saying the games I played were flawed and they are not paying me which seems very odd as I played many of the same games before and they paid out then so how come they are flawed now ?

Here is the chat transcript…..

Robert: Thank you for contacting VegasRush Casino!How may I assist you?

fjustice: My chat timed out. I was sent an email saying my withdrawl was cancelled and account closed with no explanation or anything ?
Robert: let me check

Robert: reason might have been mentioned in the email itself right?

fjustice: nothing in the email at all
fjustice: I had a balance of over $8100
fjustice: withdrawl cancelled, account closed, no reason, complete theft
Robert: no its not a theft

Any winnings that have been brought in as an outcome of game mistake or system malfunction will be null.

Robert: you will get you last deposit back

fjustice: So basically any time someone wins you just decide not to pay them ?
Robert: Thank you for your patience, please remember that we are currently assisting multiple players at the time
Robert: everything is as per the terms and policies

fjustice: You cnan jsut say that any time anyone wins ! That is utter nonsense
fjustice: You were quite happy for me to lose my $800 deposit. You are thiefs
Robert: no it was because of a flaw found

Robert: for any further concerns

fjustice: translation – we are stealing your money goodbye
Info: Thank you for chatting with us.

So they are not telling me anything and just refusing to payout and claiming some nonsense about game flaws.